The Shipbuilding Legacies of Glasgow and the Isle of Wight


As Glasgow prepares for the Commonwealth Games, I take a look at what my birth place and my adopted home on the Isle of Wight have in common.

Your immediate thought on that might be absolutely nothing or at least very little.  But apart from the fact that I grew up in Glasgow and now live on the Isle of Wight, there is another similarity.

Both have famous shipbuilding pasts and the legacy left behind in these two locations are enormous multi tonne cantilever cranes, also known as hammer head cranes, standing proudly at the water’s edge.

There are only 15 of these cranes left in the world and Glasgow boasts 5 of them, one of which is in the old John Brown’s Shipyard at Clydebank.  Built in 1907 it was used in the fitting out of many liners and battleships including HMS Hood in 1918, The Queen Mary in 1934, The Queen Elizabeth in 1936 and the QE2 in 1968.

When the work dried up, the shipyards closed and dockyards all over the country lay empty for years until urban regeneration programmes brought new life to these abandoned relics.  In 2007 one of the hammerhead cranes in Glasgow, called Titan, was restored and opened to the public.  A 150ft lift was installed up to the viewing platform which allows for spectacular views up the River Clyde and for those not bothered about the height, you can look straight down to the ground through the gridded metal platform.  During the summer months, you can bungee or abseil from the crane for charity.
At night, it’s tastefully lit and a beautiful sight from the plane as you descend into Glasgow airport.

You will come across the hammerhead crane if you take the cycle route from Glasgow to Clydebank, which continues onto Loch Lomond. 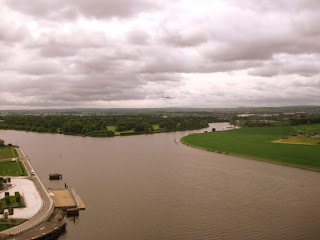 You will also come across a hammerhead crane if you take the cycle route from Sandown to Cowes on the Isle of Wight. One of only 3 left in England, it has been recognised by English Heritage and given Grade II listed status and stands by the River Medina, longing to become as popular a museum and tourist attraction like the one in Glasgow.
The regeneration of disused railway lines into cycle paths and bridle ways is nothing new, there are hundreds of great routes all over the country but there are very few that take you past giant hammerhead cranes