What could be more pleasant than learning to scuba dive in the tropical waters off the coast of Broome in Western Australia, where the water is warm, visibility is clear and the sea life is abundant, and mostly harmless, I was assured. 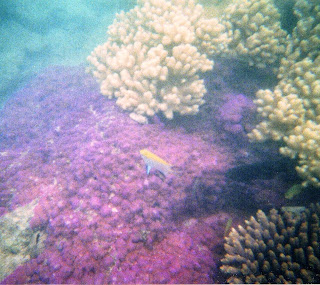 I had imagined embracing the explosion of life and colour in this new environment; swimming effortlessly alongside shoals of coral fish and marvelling at the giant manta rays as they glided effortlessly above my head. But I was brutally wrenched from these notions before I even reached the bottom.


It was my first open water dive and although I’d practised in the pool the previous day and achieved 100% in the written test that morning, it was a bit like reading a manual on ‘how to swim’ when you’ve never been in the water. You don’t even know whether you can float, or in this case, sink.

We had arrived at our dive site about an hour previously.  The water was calm, it playfully slapped the side of the boat and threw itself onto the back step and beckoned us to come in.   The sun’s reflections danced about on the surface of the water like sparkling champagne bubbles while our boat bobbed gently in the middle of the Indian Ocean.

We prepared ourselves for our first dive and with more equipment strapped to my body than a one-man band; I took an exaggerated step from the boat and plunged into the sea with as much grace and elegance as a performing walrus at Sea World.

I swam to the anchor line and started to descend.  Within a few metres the pressure had increased in my ears giving me pain.  I tried to equalise; I pinched my nose and blew with my mouth shut, wiggled my jaw and swallowed until my ears popped with an overwhelming sense of relief that ran through my body like sinking into a warm bath.  About a metre further down, I repeated the same performance, again and again until I reached the bottom.  I could tell this wasn’t going to come naturally to me.

Unaccustomed to swimming with fins, my left calf muscle went into cramp. My buddy braced my fin while I flexed my foot and then gave me a hand signal to ask if I was OK.  Instinctively I nodded but I was panicking inside and breathing rapidly in this lonely environment.  I tried to relax and enjoy my surroundings, I’d been told that you could hear the fish eating the coral but the constant bubbling noise from my exhales and the rush of air from my inhales was so loud, it drowned out everything including my thoughts. 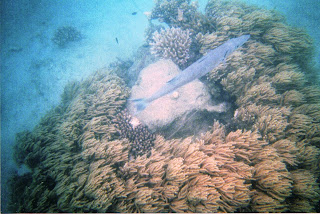 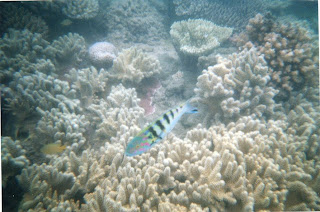 We’d been warned about landing on the coral and damaging aquatic life and not to touch anything in case it fought back but I struggled to control my buoyancy with these unfamiliar devices; an afternoon in a pool did little to prepare me for the ocean and I found myself rising and falling with uncontrolled irregularity.
I returned home after the dive feeling disappointed.  It had been an exhausting experience, both physically and mentally and one that was far from the images portrayed in travel magazines.  Most of all though, I was disappointed that I hadn’t enjoyed it when I really wanted to.
However, I took comfort when I realised, that in the last 24 hours I’d experienced what it was like to breathe underwater and to sit at the bottom of the Indian Ocean and gaze up at the surface of the water.  I felt honoured to have swum with some of the most graceful and colourful creatures in the sea, even if I was the clumsiest of them all. Perhaps someday, I’ll get the chance to give it another go.