Lisbon guidebooks wax lyrical about the elegant facades of the gothic cathedrals, Moorish castles and Manueline palaces but if I’m completely honest, I’ve never taken much interest in architecture.  To me, a building is a practical structure and as long as it doesn’t clash with its surroundings, I generally don’t notice details in its construction.  That was, until I visited Lisbon.

Lisbon is a cosmopolitan city divided into seven districts and built on a series of hills overlooking the River Tagus.  It is a relaxed and likeable city and small enough to explore on foot, but if you find the hills tiresome, then the inexpensive, trendy and antiquated rattling trams will do the hard work for you.

Most of the buildings date from the late 18th and 19th centuries after a major earthquake destroyed much of the city in 1755. However, a few buildings remain, like the Torre de Belém, a fortified fortress on the river, the Jeronimos Monastery and Castelo de Sao Jorge, the Moorish castle overlooking the city.

Both the Torre de Belém and the monastery are outstanding examples of the late gothic Manueline style, named after King Manuel I who reigned during the Age of Discoveries, in the early 1500’s when Lisbon was a sophisticated, thriving and wealthy city. 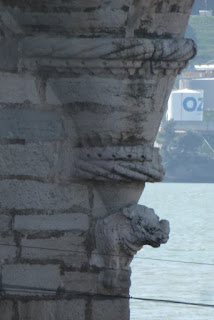 The Manueline style lacks symmetry but is heavily influenced   by the voyages of discoveries, a period of European global exploration when Portuguese navigators mapped the African coast and discovered a direct sea route to India.  Symbols from these nautical adventures appear throughout the architectural designs. Carvings of rope and sea plants, corals, shells and ships steering wheels feature in this intricate maritime work.

In the Alfama district, the oldest area of Lisbon, I found, among a labyrinth of intriguing narrow streets, the Casa dos Bicos (House of Spikes).  At first it looked like an uninspiring modern rectangular building sandwiched between traditional Lisboan houses.  But as I got closer, I discovered that it was a 16th century palace with elaborate arched windows and spiky brickwork; a curious mixture of Italian Renaissance and Manueline windows with over a thousand diamond-shaped blocks protruding from the building which is now used for exhibitions and literary events.

Buildings in Lisbon are colourful; terracotta tiled roofs and pastel coloured walls like flavoured ice cream topped with raspberry sauce.  Blue Moorish tiles adorn apartments with tiny shuttered windows and rusty balconies in steep cobbled streets that maze through the Alfama district. Even the old ladies who walk these streets daily and their men playing dominos in the cafes looked like quaint rustic monuments.


Lisbon is a city designed to be lived outdoors.  The climate makes alfresco dining a thoroughly pleasant experience with as many tables outside as inside the restaurants.  Exploring the streets on foot was like walking through the pages of Architectural Digest; I could have spent my whole trip looking at the designs but there was so much more to do in this city full of character, old-world charm and delicious cream-filled pastries.