Muddy but magical - The day I spent running with Elise, Becky, Terri and  Charlotte.

Elise Downing is currently running round the coast of UK and on day 29 we met up her at Emsworth, to run the Solent Way to Gunwarf Quays, a total of 16 miles. When I agreed to this, last night, I wasn't even sure whether I'd manage it or not, having only ever run a maximum of 4.5 miles before.

Luckily we were blessed with no rain and the terrain was mostly flat but somewhat less fortunately, we were faced with a very strong head wind with strong side gusts all the way which meant having to walk sections for fear of being blown into The Solent.

It was all worth it though when we arrived 5 hours later at a very festive Gunwharf Quays and had a lovely roast dinner.

So I say well done to my yes tribe friends, Terri Witherden, Becky Copus and Charlotte Dyson.  But the biggest well done has to go to Elise Downing who is continuing her run around the UK coastline for the next 9 months.

Join her for a run if you can, give her a bed if you're on her route, support her charity at www.virginmoneygiving.com/runthecoast or just give her a wave if you see her running by. 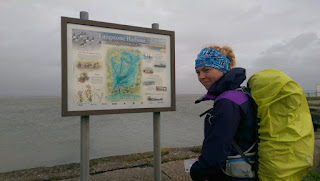