An interview with Mel & Michelle

Melanie Joe and Michelle Ellison are two remarkable ladies who recently completed a challenge that not only involved physical and mental strength but also an incredible amount of tenacity to overcome all the barriers and
red tape that had prevented other people doing what they did.

They paddle boarded the lenth of the Thames from source to sea, a distance of 206 miles.

The navigable part of the River Thames ends at Putney and by law, no one is allowed to pass Putney Bridge.  Mel and Michelle were curious about what it would take if, one day, maybe not their day, but someday, someone was allowed to complete the rest of the journey through central London to Southend Pier.

So they contacted the Port of London Authority and asked for a meeting with the harbour master, Jon Beckett, which in itself was not an easy task.  Eventually they managed to convince him that they just wanted a meeting and he gave them an hour of his time.  During that hour, they posed that 'what if ' question to him.  They were given a long list of reasons why no one can go further than Putney Bridge, everything from the amount and speed of river traffic, wakes from large boats, tidal fluctuations of up to 23feet, killer seabirds....  Everything, it seemed, would kill them if they went beyond Putney.

But! and it was a very big but, if someone were to paddle down the Thames they would not only need to complete enormous amounts of paperwork, risk assessments, route plans etc. but they would also  need to be accompanied by the only qualified person in the UK who was permittied to accompany kayaking groups through London's busiest stretch of water, record breaking kayaker, Harry Whelan.

The girls soon discovered that getting hold of Harry was going to be harder than making an appointment with the harbour master because Harry wasn't on social media. In all, Mel and Michelle spent 6 months preparing for this trip, learning how to fill out risk assessments, meeting relevant health and safety people and of course, getting hold of Harry.  I think the most amazing thing about this, is that both Mel and Michelle, planned all this around full time jobs.  They have precious annual leave and they needed that for the actual trip.

I caught up with the girls after Yestival and Mel kindly answered these burning questions for me.....

What were some of your hair raising moments paddle boarding the Thames?

On what was meant to be the last day of our journey we hit really bad weather. This was the day we were to head towards the mouth of the river and in doing so cross three major shipping lanes. In stark contrast to the beginning of our trip, the breadth and width of the river seems much more infinite and exposed and we were no longer dealing with recreational water crafts and river birds, but tankers and cargo ships. The British summer did not reveal its presence. We had strong winds, which were threatening to take us across shipping lanes earlier than planned and we had to push hard for hours to remain on the right side of river. Then it started to rain. It was equal parts tiring and frustrating. I think we were definitely tested on that day.

You learnt many new skills prior to getting in the Thames on your paddle board, like learning about tidal movements and writing risk assessments.  What other skills did you learn and how do you see these being of use in future adventures?


We learnt a lot about wind.  Wind gusts, wind speed, wind direction.  This element was a major factor at times in just how hard or easy our days were.  The weather conditions were variable but do and can impact on any sort of journey, so for any future adventure I would always check what is happening, plan accordingly and build in a contingency.
Also I was a fairly inexperienced paddler before this trip.  So for me learning to paddle efficiently was key, especially as this trip was also a feat in endurance.  I heard that my technique was a little rubbish to begin with, but I think I have improved!   I think with learning any new skill, practice, seek advice and then practice a bit more.

You two always seem so happy, I love that, it’s very infectious. Many people find that the mental endurance of a challenge is harder than the physical part of an adventure.  How did you keep yourselves motivated when you knew you still had several hours of paddling to do and you just wanted to stop?


Food!  This happens to be a major motivator for most things I do.  We had  a pretty tough third day – 9 locks, headwinds and the longest section of river that we had to cover in one day.  Towards the end of the day we ended up in a race against the clock to get to the pub in Clifton before it stopped serving food.  I always remember hitting the 9.30pm mark, dropping the paddles and boards, covered in river and bird dung, with Michelle running off into the near darkness in the direction of the pub and me yelling out behind her “fish and chips!!!!!!!!”.  After 13 hours on the river the thought of having to sit around cooking rehydrated food did not sound as appealing as a hot meal cooked by someone else!

Also I think it helped that we both enjoyed the journey, even though it was physically and mentally tiring at times.  We had worked hard to plan this trip and had time frames we had to meet on certain sections of the river.  We had an amazing amount of support from friends, fellow adventurers and other river users and this helped us see us through some of the tougher days and motivate us to keep pressing on.


What has been the best thing that has come out of stand up paddle boarding down the River Thames?

The best thing has been all the people we met along the way and all the people we have met since.  I feel like we have been immersed into this wonderful, supportive, collaborative community of adventurers.  It has also been great to have the opportunity to share our journey and all that we learnt and hopefully inspire others to create their own.

You started your journey along the river on a bike because the source was little more than a stream.  In fact the first 36km was on a bike. Do you think you might do an adventure on a bike someday? Mel, you plan to do some micro adventures on your Brompton, can you tell me about that?

I love bicycles and cycling.  I have done a few multi-day cycles including cycling London to Paris and Amsterdam.  My most memorable bike trip was in the Xishuangbana rainforest in China.  I don't think I have been so under prepared for a trip in my life.  My friend and I slept above a pig pen, showered with a giant cockroach, coped with both intense heat and torrential downpours and somehow managed to stumble across what we thought was the red light area of the district!

I would like to do more cycle tours in the future. It is such a great way to travel, meet people and see the world.   Next year I would like to do some micro adventures on my Brompton. I totally embrace the concept of micro adventures and the idea that you can have an adventure in your own backyard (or at least not that far from it).  Going by bike is just a twist on it.  Plus I happen to love my Brompton – it's like this perfectly engineered little work horse. I heard some people tour the world on them, so who knows? 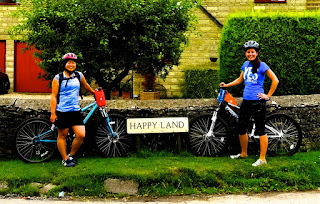 I know Michelle has already started a challenge with two other friends and the occassional guest climber, in which they plan to climb the highest peak in 48 European countries.  You went with them on their first weekend, how was that?

Michelle and two of her close friends have set about to complete this incredible challenge over the course of the next two years.  I think it will be a fantastic journey of personal achievement, physical and mental challenge, exploration and learning new skills.  I had the privilege of being a guest on their very first two peaks in Ireland.  We made it up the blustery heights of Slieve Donard the first day.  The next day, enveloped in the darkness of the morning and pummelled by both rain and wind we attempted Carrauntoohill.  Unfortunately and despite best efforts in situations like this, mother nature always wins out and we were forced to make a hasty retreat.  Fortunately the mountain will always be there and I am sure Michelle, Andy and Tom will be visiting Ireland again to conquer this peak.

When you are not planning adventures, how do you like to spend your spare time?


I like to go climbing, though the busyness of this year has meant that I haven't been able to do it as much.  Also, just as a running theme I like food! Mostly talking about it and eating it and not just in a life sustenance kind of way.

I like to travel light and I don’t like to return with anything unused, except the first aid kit.   What would you always make sure you took with you and what have you taken with you that you wouldn’t take again?

It would depend what I was doing.  For most adventures either on land or by river I always take a torch and some dry sacks to separate gear and keep the dry stuff dry.

I'm generally getting better with my packing. If I know I'm going into colder climates I will tend to overpack on the clothing front – probably a result of having spent a few restless nights out on the cold and being under prepared for it in the past.  Also, I have been guilty of taking too many shoes. So less shoes!

And finally.  Next year you are co-organising the Thames River Relay, with Totally Thames where a bottle of water is filled at the source of the Thames and passed down the river by Kayakers, walkers, cyclists swimmers and paddle boarders.  Can you tell us a little bit more about how you got involved in this and how other people can get involved too?

We are really excited to be planning the Thames River Relay.  Next year will be different from previous years.  The focus will be predominantly on stand up paddle boarding, using the river recreationally, education about water conservation and the health of the River Thames and getting communities involved in our event.

We are still in the infancy of our planning, so it is a work in progress.  People can check out our website: melandmichelle.com or follow us on facebook: facebook.com/melandmichellepaddle for updates or to get in contact with us.


Many thanks to Mel for taking the time to answer these questions and good luck to both of you in all your future adventures.