Facing my Fears & Climbing out my Comfort Zone at Sandown Rocks


An unexpected invitation to tea took me to a new high when I agreed to meet my friend Matt at Sandown Rocks 45ft climbing wall the other day.

“Right, what I thought we’d do is climb to the top, tie ourselves in and have tea.  What do you think?”  Suggested Matt.

“Of course we will,” I said dubiously.  “Who wouldn’t drink tea at the top of a climbing wall? It’s not like Mary Poppins has exclusivity on lofty tea parties.” I joked nervously.


Tucked away in the grounds of an unassuming high school on the Isle of Wight and hidden from street view is the recently re-opened, man made outdoor climbing wall, Sandown Rocks.

It has two walls, the larger of the two is shaped like a spinnaker sail with overhangs and various coloured climbing routes of differing levels of difficulty, the smaller wall, with a bouldering cave, sits beside it with equally as many challenging routes.

Stepping out my Comfort Zone

I started climbing a few years ago but discovered I had developed a fear of heights that I couldn't overcome and wasn't able to enjoy it.  I tried indoor walls and outdoor walls, real ones and artificial ones but I just couldn't deal with it, so I hung up my harness and boxed up my climbing shoes.  I spent hours online, searching for ways to overcome my fear of heights.  I thought about hypnosis, meditation, acupuncture and even climbing blindfolded, since it was probably my eyes telling my brain to feel fear.  I then realised that I really needed was a coping mechanism to deal with my fear.  A coping mechanism that could possibly be applied to other fears too and it all revolved around breathing.  I'll write another blog about what I discovered later.

Having found my coping mechanism, I was keen to try it out, so when Matt texted me and invited me along for a climb, I decided to give it a go.  It was like starting all over again; I couldn’t even remember how to tie myself in although I hadn’t forgotten how uncomfortable those tight fitting climbing shoes felt.
With a flask of tea safely in his backpack, Matt led the climb, clipping himself in as he skilfully manoeuvred up the wall with ease.

“Give!” he shouted and I released my grip on the rope allowing it to flow more freely.  I watched intently to where he placed his feet and hands in the hope that I could replicate his professional looking moves.

Then it was my turn.  My visual route planning went straight out the window as I groped around for a set of holds to get me off the ground and I realised that our difference in height had me scuppered from the start.

I’d only climbed a short distance before I became aware of the height.  My feet couldn’t have been more than 5 ft from the ground but my eyes were seeing it from over 10ft of course.  I started to feel scared.  I took some deep breaths and carried on until I couldn’t find any more hand grips within reach.

“Use your feet to smear up the wall.”  Matt shouted encouragingly.

My climbing shoes were made for this, I just had to trust them and realise that by pressing the sole of my foot against the flat wall while my heel was turned out, that it would hold me while I stretched for the next hand hold.  I tested the grip in my shoes.  It didn’t feel like it would hold.   Why was I even afraid of falling? I asked myself.  I was tied in; at most I’d fall about two inches.  But there is some instinctive urge that makes you totally dependent on your own abilities, an urge that overrides any reliance or even awareness of the rope that’s holding you onto the wall. I tried again, pressing hard with my foot like I was taking a giant step and pushed up.  It worked!  A hand hold, a foot hold, it all came into place.   A sense of relief flowed through me to have passed that hurdle. 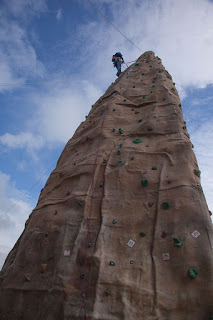 The climb inevitably got higher until I reached the small ledge that Matt was on, I could feel my heart beating faster and my breathing more rapid.  I knew how high I was, I didn’t need to look down to prove it.  The breeze was stronger up there and my legs were shaking involuntarily. I made it onto the ledge and clipped myself onto the wall.  “Look, you can lean back and nothing will happen.”  Matt confidently demonstrated.  I leant back cautiously holding onto the wall with one hand, as if that would have saved me had I not been tied in.  I could see I was safe, I felt the rope taking the tension as I leant back but I couldn’t relax.  Matt took out the flask, opened up the cake and handed me the cup then the cake ensuring I had to take both hands off the wall.  While we chatted, gradually I began to relax, my legs stopped shaking and I was even able to take the camera from my backpack and shoot some images.


There was still some warmth in the late afternoon sunshine and the view over the treetops to Brading and Shanklin Downs was beautiful.   I was pleased I’d done it and glad that I’d stepped outside my comfort zone to face my fear.

I’d love to hear what you’ve done that’s taken you out your comfort zone or how you've overcome a fear.

If you fancy having a go at climbing on the Isle of Wight, visit Sandown Rocks Facebook page for more information.