I waddled across the field with Georgia’s ankles in my hands, her hands slapping the dewy grass as we wheelbarrowed and laughed our way to the turning marker, with over 50 other couples doing the same thing. 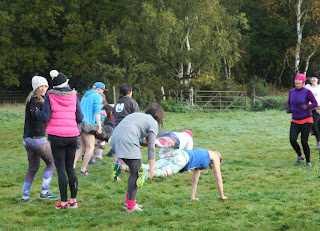 This was Project Awesome, a concept inspired by Danny Bent which began in London a few years ago and has now spread to Bristol and Edinburgh.  Project Awesome is free high-energy fitness with a twist.  The twist being that it’s loud, colourful and full of positivity; instead of sweat and tears, you get smiles and laughter, high-fives and hugs.


Since first hearing about Project Awesome over a year ago, I’d wanted to give it a go. With a motto of “We hug, we high five, we behave like overgrown children and get ‘accidently’ badass fit in the process.” Who wouldn’t want to give it a go?  But not living near London, Bristol or Edinburgh, I didn’t get my chance until Danny, in his familiar short red shorts and bright orange puffa jacket, brought it to Yestival.

Forcing myself from my lovely warm sleeping bag into the cold early morning mist was a challenge I struggled with at dawn but I didn’t expect the inner glow I got from a workout that was far more fun than painful.

We kicked off with a run around the campsite whooping and hollering as we ran past silent tents.  Occasionally a body would emerge, fully ready to join in the fun and ran along with the group.  Warm up over, it was time for the piggy back races.  “Grab a partner!” the ginger headed Danny bellowed wearing the biggest grin of all of us.

With my new partner, a complete stranger, I jumped on her back and we trotted off past the Say Yes More sign which by now was so covered in sweaty layers that it was almost unreadable.

The atmosphere was magic as nearly 100 people did press ups, burpees and squats – oh those squats!  in a field in the South Downs.

It was an awesome start to an awesome day and the most fun I’ve had at 7.30am after a frosty night in a tent.

What is Yestival?
Project Awesome